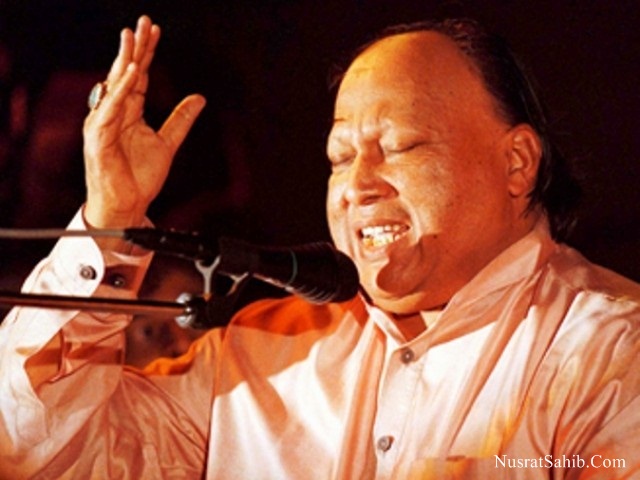 LAHORE : In loving memory of the late Shehenshah of qawwali, musicians came together to commemorate his services at Sargam Studio, in Lahore today. While today's musicians still hold Nusrat's songs close to their heart, some of them opened up about his works being an important asset to the music industry.

"Two styles of the qawwali were popular after the creation of Pakistan. One was that of the Sabri Brothers and the other was Nusrat Fateh Ali Khan's," Sher Ali qawwal told The Express Tribune. "Nusrat's advantage was that he hailed from a purely qawwal family and singing this type of music was in his blood. But, no one can replace his beautiful voice and distinct style of singing."

When Nusrat kicked off his career, his father Fateh Ali Khan was not very pleased. Similar to the norm of most families, he too wanted his son to become a doctor or an engineer someday. However, Nusrat's strong penchant for music kept his faith in himself going. His first performance was at the chehlum of his father when he was just 16 years old and from thereon, his career flourished. "Many qawwals will come into this world, but there will be none like Nusrat again. I have seen the time when his career was shining bright and his name still shines today," revealed renowned folk singer Shaukat Ali Khan.

Nusrat's famous Qawwali's include Ali Da Malang, Ni Main Jana Jogi De Naal, Tum Ek Gorakh Dhanda Ho, Yaadan Vichre Sajjan Diyan, Meri Toba and many others that still form the music collection of the current crop of qawwali listeners. However, his first hit qawwali was Haq Ali Ali. He sang in Punjabi, Urdu, Persian, Hindi and other languages during his lifetime and also performed in more than 40 countries including the US, UK, Japan, India and Canada and composed songs for films and released multiple solo albums. Nusrat was also presented the Pride of Performance Award.

"Since the last two decades, we have been celebrating Nusrat Fateh Ali Khan's death anniversary at Sargam Studio. This time we planned a bigger ceremony because it has been 20 years since his passing," said Sargam Studio owner and musician Raza Shah. Nusrat was the founder of Sargam Studio. "People from all over the world visit our studio to see the place where Nusrat produced most of his hits," added Raza.

However, lyricist Altaf Bajwa expressed grief over the shabby condition of the studio now. "Nusrat sung and recorded Ali da Malang, Ni Main Jana Jogi De Naal and Dam Mast Qalandar Mast Mast in the studio which is in shambles now. It is sad that we didn't protect this place after his death. While his fans are still demanding for the security of Sargam Studios, renowned entertainment personalities who visited the place during Nusrat's lifetime have forgotten about it now," said Altaf.

Nusrat breathed his last on August 16, 1997, following a cardiac arrest.